Posted About Seven Months Ago by Leroy Kleimola

Anyone with information on this case is asked to contact ISP Zone 4 Investigations at 217-782-4750. 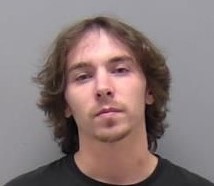