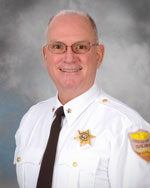 Christian County Sheriff Bruce Kettelkamp would like to notify the citizens of Christian County of a recent scam that is going around the county. The Sheriff’s Office has received numerous calls regarding a male individual calling residents, identifying himself as a deputy from the Sheriff’s Office, saying that they have a warrant for their arrest and they either need to call him back or turn themselves into the office. The phone number showing up on the caller ID’s start with (217)-620 and followed by various other numbers. If the individual leaves a voicemail he says to call him back with an extension to dial. Kettelkamp stated they have not received any calls indicating the individual is requesting money since most of the calls have either been left on voicemail or the residents have hung up on the individual. The Sheriff’s Office will never call people randomly and tell them they have a warrant for their arrest. This same type of scam is occurring in many surrounding counties.

If you receive these types of calls, immediately hang up on the caller and never give them any type of personal information and never wire any money or obtained money orders. If you do become a victim of these scams, report it to your local law enforcement agency.