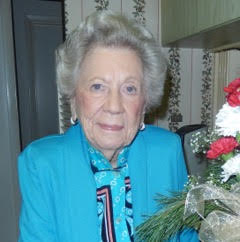 Jean E. Marshall Ellis, 97, of Sarasota, FL, formerly of Taylorville, IL, passed quietly into God’s loving hands at 6:30pm, on May 15, 2016 at Tidewell Hospice in Sarasota FL.  She was born on October 3, 1918 in Taylorville, the daughter of Harry A. and Iva Lopossa Brubeck.  She graduated from Taylorville High School in 1936.  She married Alpha E. Marshall for forty-five years until his death in 1983.  She later married Quentin Ellis, he passed away in 1988.

Jean was proud to have served her county during World War II, working for the federal government as an administrative assistant on the Manhattan Bomb Project in Decatur, Illinois.  She also worked for the State of Illinois in the Department of Revenue.  She was a member of the Taylorville County Club and the Gulf Gate Golf Club in Sarasota where she scored a hole in one.  She played in several bridge clubs and was recognized as an accomplished player.  She was active in Democratic politics in Taylorville and Sarasota.  She was a member of the First United Methodist Church in Taylorville and the Vamo United Methodist Church in Sarasota.

Funeral services will be held at 11:00am, on Friday, May 20, 2016 at McClure Funeral Home in Taylorville with Rev. Becky Nicol officiating.  Visitation will be held one hour prior to services on Friday.  Burial will be in the Grove City Cemetery in rural Mt. Auburn.  Memorials may be made to Chaddock Children’s Foundation, a not-for-profit foundation to support Chaddock’s ministry for troubled children and families (www.chaddock.org)

McClure Funeral Home and Cremation Services is assisting the family with arrangements.  Memories of Jean, or condolences to the family may be left online at www.mcclurefuneralhome.com